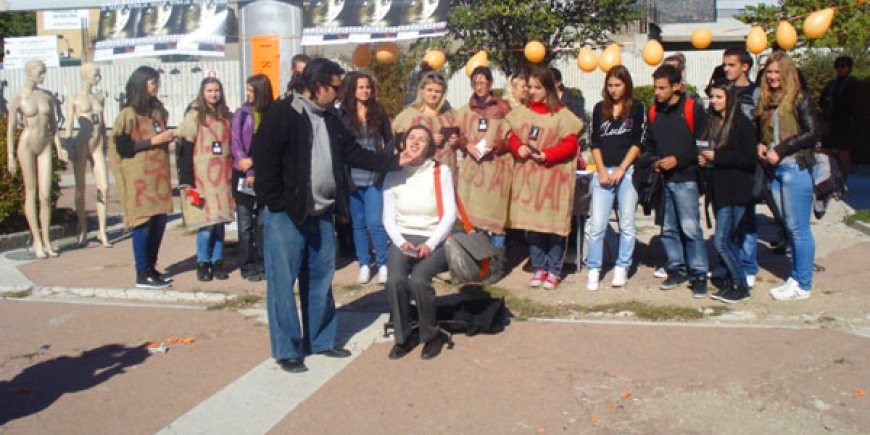 What is trafficking in human beings?

Although the majority of countries today claim that human rights and freedoms are fully observed there, the phenomenon of slavery has not disappeared yet – it still exists in the 21st Century. Millions of women and children, but also men, are forced into prostitution, domestic service, work on plantations, begging and other forms of coercion. People are trafficked within the borders of one country (internal human trafficking), but also inter-continentally (transnational human trafficking), and therefore all countries are facing this serious problem.

International organizations possess different data on the number of persons who fall victim to trafficking every year and on the profits generated from this criminal activity:

• According to the United Nations, 700,000 women, children and men end up in human trafficking every year.

• US State Department estimates that 900,000 women, children and men fall victim to trafficking every year (of this figure, 20,000 in the territory of the USA).

• According to some other surveys, 27 million people today are in servitude, of whom 8 million are children (as many as 20,000 children from Cote D’Ivoire).

• Human trafficking is one of the three most profitable criminal activities (besides trafficking in drugs and arms).

The socio-economic factors affect trafficking. However, it is driven by organized criminal groups which communicate very easily through “the language of profits”, while human beings are treated simply like “talking objects”.
Human trafficking carries a variety of exploitative goals, making it an international, organized criminal phenomenon, which has severe consequences on the security, welfare and human rights of its victims. Human trafficking, especially for the purpose of sexual exploitation, is a “high profit-low risk” criminal activity that takes away the quality of life, and in some cases the very life of its victims. This is a modern-day slavery, whose victims are often women and girls. In many cases, physical and mental injuries inflicted on the victims of human trafficking are so severe and permanent that their full physical and mental recovery becomes impossible.

According to UN Convention against Transitional Organized Crime, under Article 3 of the Protocol to Prevent, Suppress and Punish Trafficking in Human Beings, especially Women and Children, human trafficking is defined as follows:

-“Trafficking in persons shall mean the recruitment, transportation, transfer, harboring or receipt of persons, by means of the threat or use of force or other forms of coercion, of abduction, of fraud, of djeception, of the abuse of power or of a position of vulnerability or of the giving or receiving of payments or benefits to achieve the consent of a person having control over another person, for the purpose of exploitation. Exploitation shall include, at a minimum, the exploitation of the prostitution of others or other forms of sexual exploitation, forced labour or services, slavery or practices similar to slavery, servitude or the removal of organs”.

It is important to know that, according to Article 3b of this document, the consent of a victim of trafficking in persons to the intended exploitation shall be irrelevant; that is, it does not diminish accountability of those persons who committed human trafficking.

Also importantly, any reference to “a child” in this document shall mean any person under eighteen years of age.

• Transportation – The next phase following the recruitment is transportation and transfer, which may include the provision of accommodation and admission of victim with a series of temporary harbors, including initial entry and transfer within the borders of the victim’s own country, but also serious violations of human rights and physical abuse during the transportation, in which case the state border may, but need not be passed.Many victims have never left their country before and they are totally dependant on human traffickers. Some of them are leaving their homes without passports because they are told that there is no real need to have one or that they will have it later. If they have a passport, traffickers often take it away and keep it for themselves as a security measure against the victim.When victims are trapped in some illegal situation, they are especially subject to the whims of their traffickers. Traffickers know that, because of their illegal status, they are hardly likely to go to the police or any other authority for help.

Victims are often djeceived by being led to believe that they are going abroad to work as waitresses, nannies, models, factory workers, dancers…, but when they get there, they are forced into prostitution, forced labor, begging…

More in this category: « Child pornography and pedophilia Trafficking in Persons Report 2018 »
Login to post comments
back to top
Top 4
News
Activities

Preparatory online workshop on the occasion of

Statement on Support to Anti-Trafficking Civil